Rapidly gaining popularity due to it affordable price, ease of installation, and durable beauty, laminate flooring got its start in Sweden in the early 1920s when lamination was first developed. Lamination is composed of many layers, with a wood pulp being the core of it, held together with glue or resin and then cured with heat or pressure. Lamination creates a new material that is stronger than each of its components.

This synergistic quality makes lamination the method of choice when creating products that must be durable and reliable, such as vehicle windshields, giant-sized beams, and floors. Laminate floors are today’s high tech solution to the problem of affordable, durable, and beautiful flooring that is easy to install, scratch and moisture resistant, and virtually maintenance free. 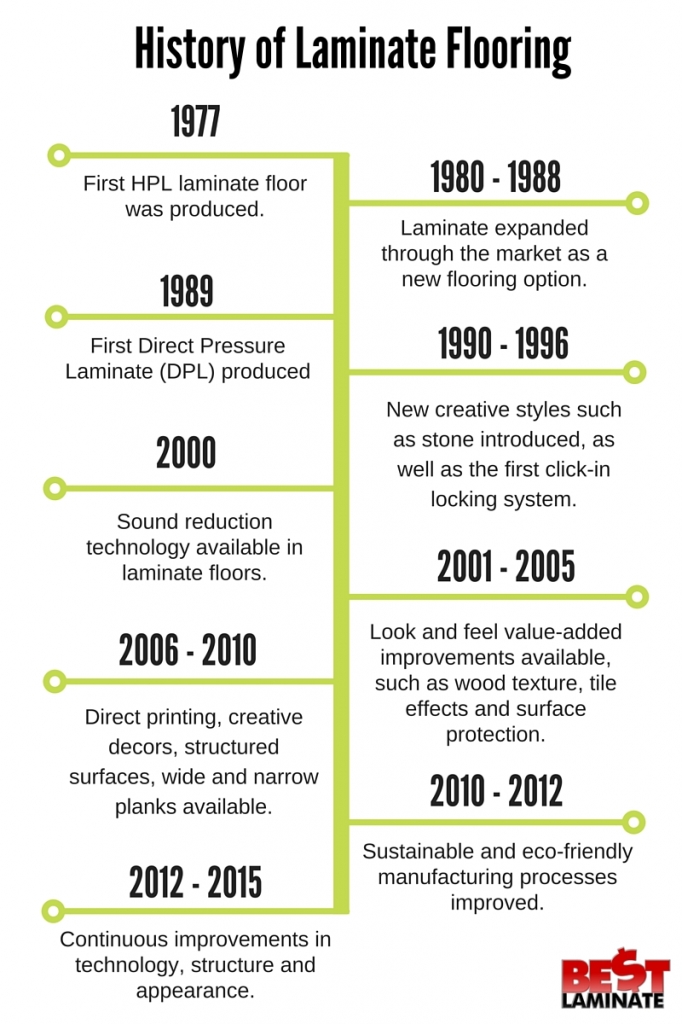 That industry took off for a few decades, but as sales started to decline, the creators started to look at other uses for the popular material.

In 1974, Perstorp AB acquired AB Tilafabriken. In this new partnership, technology was created to refine laminate even further so that it could be used on countertops and windowsills. But that still wasn’t enough for the company.

In 1977, Perstorp Corporation sat face-to-face with the reality of poor sales. They put together a brainstorming group to find a way to break free from the low sales and use their newly enhanced technology.

After much deliberation, the group found multiple uses for their once popular project, creating high-pressure laminates (HPL). By 1979, the first ever HPL floorboard rolled off the assembly line and Perstorp Golv GL80 became the first laminate flooring ever sold.

Over the next decade, marketing for the new flooring began and sales skyrocketed. New formats and developments took place. It was clear that the future of laminate flooring was being created.

About a decade after the first HPL flooring was made, a new type of laminate was created – direct-pressure laminate flooring (DPL). This was a major technological innovation because DPL was cheaper and easier to produce. Now, more homeowners could add laminate flooring to their houses at a much cheaper cost.

In 1994, Pergo launched a marketing campaign in the United States selling laminate flooring. In 1996, the first United States factory opened in Garner, North Carolina. At the same time, Pergo filed for yet another patent for embossed-in-register technology.

In addition, the flooring itself became more advanced with click-in systems added in the late 1990’s, and sound insulation added in 2000.

The original laminate flooring, Pergo, was and is made by chopping up scrap wood that might otherwise have ended up in landfills and creating thin sheets. These sheets are compressed together using glues or resins, and then cured with heat and/or pressure to create planks that are both flexible and extremely strong. The laminate flooring planks are then topped with photographic images of various hardwoods, stone, or tile. These images have developed to the point that it can take an expert to differentiate between real hardwood and piano finish laminate flooring. Many people use the ‘Pergo’ name to refer to all brands of laminate flooring, but there are other manufacturers and other brand names.

Pergo laminate flooring quickly became popular in Europe after first being introduced on the market. Its affordability, ease of installation, and durable beauty made it highly sought after in homes and businesses of all sizes. It wasn’t introduced to North America until the early 1990s, but the market has continued to expand at an ever increasing rate as homeowners work to increase property values and comfort in today’s difficult housing market. There are several top name laminate producers on the market, and many options as far as decor, finish and style.

Laminate flooring is rapidly replacing the allergen-infested carpets of apartment buildings with easy-to-clean planks that retain their like-new look for far longer than other materials.

Another reason behind the rapid expansion of the laminate flooring market is a result of how simple it is to install. Even the inexperienced homeowner can install new flooring in as little as a weekend.  There is no need for special tools or skills when installing laminate flooring, unlike those needed to install carpets, stone, or tile. Along with easy installation, laminate flooring does not require waxing, sanding, polishing, or sealing to retain its beautiful appearance, making it even more useful for those with little time to spare for extensive cleaning tasks.

As laminate flooring gained in popularity, new manufacturers came upon the scene, making claims about the durability and wear tolerance of their products. To ensure customer satisfaction and to eliminate lower quality products, a testing and rating system was initiated in 1994 in Germany. This organization tests the wear claims made by laminate flooring manufacturers. The planks are tested for resistance to scratching, burning, and staining, as well as their tolerance against furniture castors. Only the laminate flooring planks that pass all portions of these tests are given what is called an AC rating.

This increased reliability helps consumers select products that are proven to provide the benefits promised by piano finish laminate flooring. The natural progression from durable counter tops to affordable, easy-to-clean planks has made laminate flooring a family favorite choice for home improvement. Recent developments are making laminate floors even more popular, as further research makes it more durable, more affordable, and more difficult to distinguish from floors made from living trees. Clearly, this beautiful, affordable product has only begun to make its mark on the human standard of living.

We understand that there is a lot to choose from when it comes to the various types of laminate flooring. We’re here to help! Contact us today to speak with one of our flooring experts and learn more. 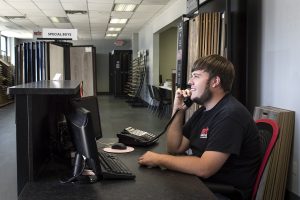 Try our floors virtually. Free visualizer tool that lets you see what our flooring will look like in your home. Order up to 5 samples completely free!